I’m always looking for a new idea, or way to utilize hardware to it’s maximum. Case in point, I was browsing one of my favorite YouTube subscriptions (LinusTechTips) a few months ago, when a video regarding using virtualization to game AND stream from the same hardware. The wheels were turning as soon as I started watching. The premise was, take a very powerful multi-core high end desktop/workstation CPU and with the help from some trick software (Unraid by Lime-Technology) create a gaming/streaming/storage server out of it. Now, I’ve been using Unraid for over a year for my current storage/file sharing/virtualization/container server and have been really happy with it! It’s extremely flexible and powerful, not to mention, easy to expand and relatively inexpensive. That’s a topic for another blog post (the design of my network as well as the Unraid server), but leveraging GPU pass-through capabilities means Unraid is PERFECT for this task. First step for me, was planning the hardware. I knew I wanted to use a high end Core i9 Intel CPU for this task. My current desktop was no slouch, but didn’t have enough cores for this task.

The current specs are listed here:

So no issues gaming with this rig. But I’d like to dabble in some streaming at the same time. Most professional streamers are using two machines. A beefy gaming rig to play on and then a dedicated second machine for encoding, interaction with the audience, audio processing, management of the stream and other various tasks while they play. This is perfectly reasonable and logical. My current rig does both, but there are issues with managing the stream while I’m gaming, not to mention there is a noticeable effect on the gaming experience. So the LTT video brought up a great point. What if you could do this all from one machine, a single high-end rig? They made it work surprisingly well in the video, but left out a lot of details regarding the actual process, as well as how it performed long term. I’d like to explore this build on my own, but get into the weeds with details on how/why and does it actual work? I’ll likely make several parts, as I start to get the hardware and items needed to build this.

Here is a realistic (cost vs performance) build, to upgrade the current rig to be able to attempt this experiment:

That’s all I can think of right now. I may come back and edit this post if I uncover any other requirements or needs.

As I said above, I found a stellar deal on a modified Core i9-7900X from a seller on ebay (xtremeoverclock). It was an auction, so I definitely was at the edge of my seat during the last few seconds, before I got the notification from eBay that I was the highest bidder! I won’t dive into too much regarding why the need to de-lid the i9 series CPUs, there are plenty of YouTubers and bloggers who cover this Ad nauseam. The CPU showed up within a few days, so I was able to build the system on a week night. This was my first x299/LGA2066 build, I’ve generally stuck to the 115x platforms for home stuff. The cost was always prohibitive for me to justify anything above that. Overall, the system went together easily. EVGA’s board layout is top-notch, but I actually found some of the boards features to make things a bit difficult. Primarily, the location of the EPS12V connectors (this board has 2 of them, and supposedly it’s a requirement to have a more stable overclock!) and the way the ATX power connector is designed. Most boards the power connector is perpendicular to the board, meaning it’s just soldered right to PCB. The EVGA connector is actually turned 90 degrees over, and a notch is designed into the PCB. This is a great idea, however, my power cables, being folded in the system for roughly three years since the original build, made it difficult to plug in. I flexed them back and forth a little until I could seat them. I actually needed to re-route the EPS12V connector to make it long enough and clearance the radiator/fans at the top. 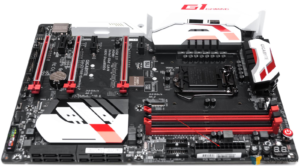 Otherwise everything went together well. First boot the system fired and went into the BIOS. Being the first time with this board, I spent some time reviewing the BIOS. I noticed that my NVMe drive was not showing up under NVMe devices. I was a little concerned that maybe I just didn’t seat the SSD right. I shut the system down, removed the NIC and GPU and pulled the shroud covering the SSD off. It looked fine, but I re-seated it anyhow. Put the system back together and booted. Again, nothing showing. Shut down again and moved the SSD to the other m.2 slot just for piece of mind. Again, nothing showing. Off to Google at this point, as well as a quick peek at the manual to see if I missed something. Other users reporting that the 950 Pro doesn’t show up in the BIOS, but once entering Windows 10 setup, it would be listed as a usable drive for the installation. Sure enough, I fired up Windows 10 and the drive was showing. Installation was quick, I think under 10 minutes total from first boot to a usable desktop. Impressive. Next, the furious web browsing and downloading of all of the necessary drivers for all of the hardware. It was late and I spent way too long troubleshooting the SSD issue, so I left the machine at a state I could pick up in the morning.

The next morning, some testing revealed excellent temperatures with all 10 cores loaded at 100% using AIDA 64 Stress test. The max temperature I saw with the AIO running in “balanced mode” was 75C. All 10 cores were running in “turbo” mode at 4.0Ghz. Perfect baseline temperature. I will experiment with overclocking the system at the current state. Stay tuned for my next post regarding overclocking results and the 3-in-1 system!